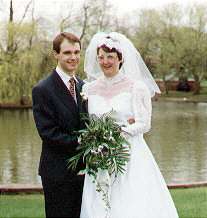 We were married on 27 April 1996 in Stoke on Trent. There were around 100 guests from as far apart as Livingston and Cornwall, and we thoroughly enjoyed the big event. We then spent the best part of two weeks on honeymoon in Sorrento, Italy: sunshine and showers but always warm, very relaxing, a holiday never to be forgotten.

We are living in the house that Graham have been in since 1992 and very slowly getting it into shape. The bathroom has been a long job: Graham had a new suite fitted well before we got married, but this revealed that the bathroom needed re-plastering and tiling. Having got a plasterer in, Graham decided to do the tiling himself and regretted it - he is not a DIY person. It took a long time to get the shower refitted, and we finally got a new floor covering down in late November.

Graham has been swimming regularly for a number of years, under doctor's orders (!). Dylys was a non-swimmer, but has faithfully stuck at her lessons since June, and can now swim a length of the teaching pool, and even impressed Graham last time she came in the main pool with him.

We became a one-car family in July, when we sold Dylys' Fiesta. She now walks to work most mornings (well - she is much closer to her work than Graham).

We paid a long overdue visit to Scotland in August. Graham worked in Livingston from 1983 to 1992, and this was his first visit north of the border since then. We were overwhelmed with the welcome we got when spending a couple of days in Livingston, and then we headed up to the Isle of Skye for a couple of days. We had some excellent weather the first day there, and really saw the island at its best.
We visited Graham's Dad and Grandma in Cornwall in November. The weather was mixed, but we were able to get in one decent walk along the coast of the Camel Estuary. Graham also spent a number of hours helping his Dad to get started on his new computer (he had been hitherto computer illiterate).

The other home improvement came in later on in August: we had fitted wardrobes in the main bedroom. Since then we have sold the old free-standing wardrobe and moved the computer into our bedroom. This now leaves space for the two single beds in the spare room: so if you would like to visit, the house is all ready for you.
After a year of being on the market, we had made no progress in selling Dylys' old house, so in November we started renting it to friends. We had not realised how complex renting is, and it is still our hope to get the property sold as soon as possible. In fact, both houses are on the market, and should Redwood Place sell first, we may well be moving to Dylys' old house (short term).

Graham is gaining new experience as a Sunday School teacher: started in October. He has a class of seven to eight year old's, and at Park Evangelical Church classes are shared so that he is only on duty half the Sundays. Meanwhile, Dylys has responsibility for organising the communion at the church. Since this takes place on a weekly basis, we always have to be at church early either morning or evening in order to get this ready.
Graham was sorry to leave his last church, Blurton Free Baptist, when we got engaged. He had been part of the pulpit committee, trying to recruit a new pastor. We were pleased to be able to attend the induction of Ian Harrison as pastor of the church in October.

After many months of rumour and speculation, Graham's company was finally sold by GEC to ABB in November 1996, so he now works for ABB Metering Systems. We were given a very positive message by our new owners, but it is too early to tell what kind of restructuring may follow.
Posted by Graham at 08:35