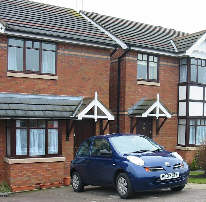 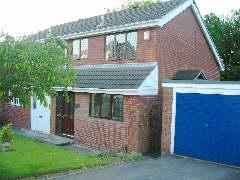 Having put our old house on the market in May 2005, we finally moved in May 2006: we were able to buy the house that we had seen and set our heart upon back in June 2005 - a mile and a half from the old house. We have traded our basic two bed semi for a three bed semi with a garage and a wonderful rear view of the wooded bank down into the Bollin Valley. Until November, we could see nothing but a wall of green from the rear of the house. Over the winter months, we can see something of the river, the railway line, and the footpaths beyond the trees.

The house move meant putting back our holiday planning. Our plans to going away somewhere special for our tenth wedding anniversary were shelved (we moved house two weeks after our anniversary). We spent a week in Cornwall in June, visiting family, and walking both along the coast and inland. Our main holiday was at the end of September, in the Lake District, where we climbed the curiously named Darling Fell and Lowe Fell, Skiddaw, Scafell Pike, and Latrigg, and managed a few low level walks. We made a second trip to Cornwall at the end of November.

No real changes: Graham's employer has been renamed from Hfs to Capital One, since Capital One acquired the business last year. Graham has won an award, which pays for a short break: we plan to use this for a trip to Cyprus next year. Dylys still works for the Information Commissioner.

We are active members of Bethel Baptist Church, where Dylys is a deacon and Graham is church secretary. The main event of the year has been the Big Deal weekend in July, when virtually all the churches in Macclesfield joined together under the banner of the Message Trust from Manchester: we did social work and community events around the town on the Saturday; and open air service, family fun day, and concerts in one of the main parks in the town on the Sunday. The Big Deal weekend was followed up by a Community Carol Service at Macclesfield Leisure Centre, shortly before Christmas.

We joined in the church weekend in Scarborough in March. The weather was unseasonably warm, and it was nice to enjoy the coast as well as the time of fellowship at the full-board catering "Green Gables Hotel".

We were pleased to see a baptismal service in October, not just for the two that were baptised, but because six others in addition to the two entered into formal membership on that day: a record for our small church.