The year did not get off to a very happy start, wtih two funerals in the first month: Dad Patrick (Dylys' father) died after months of being in and out of hospital following a major stroke in the summer of 2007. Less than a couple of weeks previously, he had attended the funeral of his brother Uncle Cyril. 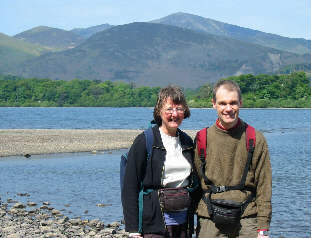 We booked up a caravan for a week's holiday in the Lake District in the middle of May. However, two or three weeks before we were due to go, we got a phone call from the site owner to say that due to unforeseen circumstances he had to cancel our booking. We did some frantic phoning around and got a caravan at another park near Bothel, not very far away from Cockermouth where we had originally booked. It was a great week during which we were able to climb Helm Crag near Grasmere, Grasmoor by Buttermere, Haystacks and Fleetwith Pike , along with some gentler walks.

We spent a long weekend with family in Cornwall early July - the weather was not so good this time around, so our walking activities were limited. We spent a few more days down in Cornwall in November, but although we were able to catch up with family nicely, Graham was not very well, so walking was again curtailed.

After the several incidents recorded in last year's journal , our car fell sick big-time in February. The engine malfunction indicator lit up on the return journey from Leicester: fortunately we got home OK, but the following day the car was very jumpy and really not driveable. We were reduced to bus and train for over a week whilst it was in for repair. Then, on a couple of occasions, we had to book the car in again to get a malfunctioning airbag malfunction detector sorted out - we were getting a little weary of the hassle and expense associated with this car! Just weeks later the car became very noisy: it took some time to diagnose, but it needed new wheel bearings. Once we had got the car running OK again, we decided to trade it in before the next problem arose. We had only kept the car for four and a half years, and had budgeted on keeping it for eight. But in August we said good-bye and took delivery of a new Hyundai Getz. It feels a more basic car than the Micra, but we will be pleased if it requires less visits to the garage.

We remain active with Bethel Baptist Church in Macclesfield. This year, churches around the UK have been getting together for Hope 2008 - to show 1000 hours of kindness to our communities. At Bethel we helped to renovate a playground in a local park, and organised community fun and games on the recreation ground. The two of us were stewarding on the Hope Sunday morning when there was open air worship and "Kidzone" children's activities.

Last year, Dylys joined "Claritas", the fund-raising choir of the East Cheshire Hospice. This year, she has joined them for concerts in Bollington, Wilmslow, and Congleton; and they had a summer outing to the Eisteddfod at Llangollen. Dylys also joined the community choir that provided the backing for the Graham Kendrick concert, held at Macclesfield Leisure Centre in December.