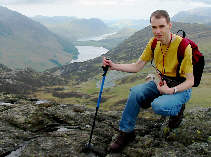 Lake District at the end of May, staying in an excellent caravan on the edge of Cockermouth, overlooking the Lorton Valley. The weather was rather mixed, but we managed a good walk over Grasmoor; we did Sharp Edgebut failed to scale the cliff to Blencathra at the other end, so we repeated Sharp Edge in the reverse direction and took an alternate path up Blencathra, and we finished off the week with Great Gable.

North Wales at the end of September, another excellent caravan above Penmaenmawr. The weather was very mixed, with quite a bit of wind, which put us off climbing high. But we did climb Snowdon in the dry, and the clouds parted to give us the spectacular views from the top that have eluded us on previous occasions.

We only bought the house three years ago, but that was when the housing market was frantic, and we ended up with something smaller than we really wanted. So we put the house on the market at the end of May (as soon as we returned from the Lake District). We have had loads of viewers during the year, but no offers. It is a slow market - the house we would really like to buy has been on the market for longer than us - we are hoping for good news next year.
Our central heating boiler broke down in December, and since it had been periodically leaking for over a year, we decided that it was time to replace it. Fortunately, it was a mild weekend when it broke down, and we managed to survive a couple of days with a kettle and an oil-filled radiator.

On a more positive note, Dylys' Mum and Dad sold their house much more easily and we helped them move into their new bungalow in August.

No changes this year: Graham is still working for Hfs, and Dylys for the Information Commissioner. Graham used to work for Critical Path in Tytherington before being made redundant in 2004 and getting a new job with Hfs whose head office is on our doorstep. But with head office bursting at the seams, and with Critical Path being much reduced in size, Hfs acquired the old office in Tytherington. So in March this year, Graham moved back to the office where he was working with his previous employer!

We are active members of Bethel Baptist Church, where Dylys is a deacon and Graham is church secretary. Dylys is also treasurer of the building fund, and looks after the communion, whilst Graham maintains the Bethel web site and helps out at the After Eight youth club.

This year we took part in the church weekend at Beechwood Court in Conwy and helped out with the family fun day in August.

It was nice to have a quieter than usual Christmas. Usually we drive long distances on Christmas day, but this year, following the Christmas morning service at Bethel, we entertained Dylys' family. Graham was at work one day between Christmas and New Year, and we spent a day with Graham's family at his sister's house in Solihull.

Our gas boiler broke down a couple of weeks before Christmas, and we opted to have it replaced rather than serviced, so we were without heating and hot water for three days until it was installed properly. Consequently, the kitchen needed a bit of touching up around the boiler, and it was useful to get this done at Christmas.