The first four months of the year were an unusually busy time for Graham. His company had subcontracted a substantial piece of software development work to a company in Cardiff, which underwent system test and release to the first customer, also in Cardiff, during the first four months of the year. Consequently, Graham spent most of each week during this period down in Cardiff to oversee the work. It was a good experience, but had an obvious impact on commitments at home. Dylys bravely put up with this state of affairs but, needless to say, would rather have had Graham at home.

Dylys has long been a fan of Andrew Lloyd-Webber, and we saw that TSB offered a package deal with credit card loyalty points to go to see a show in London. We went down at the end of January to see Starlight Express, spent one night in a London hotel, and also visited the Science Museum and the National Gallery. A brief, expensive even with the package deal, but very memorable holiday.

Graham's Dad and Grandma live in Cornwall, and both of us are always glad of the excuse to visit that part of the country. We went for a long weekend in March, and for a week in October. It is quieter and easier to get about outside the main holiday season. The weather may not be at its best, but at these times of year it is considerably milder than it is at home up north. On the way down in October we called in to see Graham's brother Phil in Taunton.

It was our first wedding anniversary in April. All the time working in Cardiff was not without its rewards: Graham usually stayed in a Post house hotel which runs a loyalty scheme offering points towards free nights away at weekends. So we booked up two nights at the Leeds/Selby Post house. We had hoped to get out for a decent walk on the Saturday but the weather was unsettled, so we went into York for the day instead. Their "Park and Ride" scheme is excellent: a very quick bus ride from outside the city into the centre. We spent several hours in the Castle Museum. We went back to the hotel in the evening, Dylys picked a restaurant out of the Yellow Pages, and it proved to be one of the best meals out we have had.

It was Dylys' birthday in July. Graham assumed that she would like to go out for a meal together, but she fancied a trip to see Warwick Castle instead. We had a good day out to see the castle which was started in Norman times, and extended and refurbished over the centuries right up to Victorian times. We visited the dungeon and torture chamber, and managed to escape without too much harm.

Holiday
Our main relaxation holiday of the year was a week in the Lake District at the beginning of June. We felt God's blessing at the time when it was warm and sunny most of the week with virtually no rain. We felt it more so later in the month, which proved to be one of the wettest on record! Unfortunately Dylys' feet blistered up and we were not able to do the amount of walking that we would have done otherwise. As though to balance our bodies up, when Dylys' feet were at their worst we went rowing on Derwent Water and we both got blistered hands! (not to the same extent - these quickly healed). 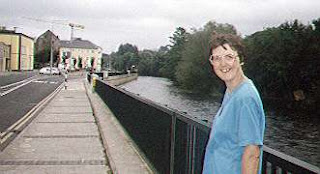 In August we joined a mission team going to Clonmel, a town in the south of Ireland. The pastor of one of our sister churches in Stoke on Trent was previously pastor of Clonmel Evangelical Church for a number of years, and he organised the trip to support the small evangelical church in a town which is mainly nominally Catholic. We only went for the first week of a two week mission, and were involved in door to door and open air work. It was an enlightening experience to do this work in a place that was in some ways very similar, and in some ways so different to home.

We had the pleasure of visiting Graham's sister Karen in Solihull in September: she and her husband Andy had just produced their first child Matthew. We took turns at holding him in our arms, but he has not persuaded us to have one of our own yet.

We both signed up for evening classes in the autumn. Dylys has been studying counselling at a local hospice. Graham went for the Internet at Keele University: he has browsed the World Wide Web before, but does not use the Internet at work, and is hoping for a modem for Christmas for more regular access.

After two years on the market, we finally completed the sale of Dylys' old house at the end of November. Things started moving in September when a woman came to view the house on a Friday evening and our Estate Agent phoned us on the Monday to start negotiating the price. We have had to accept substantially less than Dylys paid for the house, and pay for some maintenance work to be done before the deal could complete. We thank God that we are in a position to stand the loss: we have friends who are not. We are relieved and delighted to have the burden off our backs.

We are still active members of Park Evangelical Church: Graham has a Sunday School class, whilst Dylys looks after the communion. One of our elders has recently left to start a church plant in Stafford.
Posted by Graham at 08:52