Graham had a modem for Christmas and got us properly established on the Internet in January, as you will be aware if you are reading this on-line! This was the logical step on from going to an Internet evening class last year. In amongst our Web space allocation, he has set up a site for his Dad's business, "West Country Accordions", which you can access from the index on the left hand side of the screen. You will also find our house advertised on this site: do have a look around! We bought a scanner in the autumn, primarily in order to illustrate the house site, so you will find lots of pictures.

Graham signed up for evening classes with the Independent Theological Academy, and was studying in Hanley (the city centre of Stoke on Trent) on Monday evenings for the first three months of the year. He should now know more than he did before about Cults (churches which appear Christian but which differ in at least one major doctrine), Interpreting the Bible, and Doctrine.

In September, we have both decided to turn linguistic! Graham is now studying the C++ programming language whilst Dylys signed up for sign language. Disappointingly, Dylys' course was under-subscribed and was cancelled after the first meeting.

We are active members of Park Evangelical Church in Stoke on Trent. Towards the end of 1997, one of our elders moved on to plant a new church in Stafford. He also happened to be our Prayer Group leader. Graham has now taken over leadership of the group, and is responsible for organising and leading this group of around ten people on the first Wednesday of each month. He also shares a Sunday School class with another teacher, and so is teaching around half the Sunday mornings.

Graham took a week off work in August to help out with the children's Holiday Bible Club. Each morning started with activities for all the children together, and then they were split into small groups for which Graham was involved in some of the teaching. There were plenty of leaders so it was not an intensive week. It was nice to be able to get up a bit later than during a normal working week, and generally the afternoons were free.

Dylys is responsible for preparing the communion in the church, which takes place three times a month. She also speaks at Ladies' meetings occasionally.

Some joyful occasions and some sombre ones. To start with the former, we went to the engagement party of Sandra (Dylys' niece) in February; and to the wedding of Elizabeth (Dylys' cousin) in March.

Not so joyful, Graham's Grandma died in March. She had suffered a stroke at Christmas, and recovered remarkably well. However, she suffered a more serious one mid-February and did not pull out of this one. We were glad to be able to visit her at the end of February (she lived in Cornwall), but then she died a couple of weeks later and we went down again for the funeral. 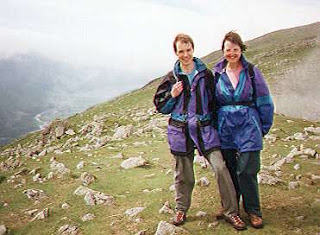 It was our second wedding anniversary at the end of April, and we spent the weekend at a Posthouse hotel as we did last year: Graham still has some points left on his Posthouse loyalty card from all the time he spent away from home early 1997. This year we went to Preston for three nights. The hotel is in the middle of the town, not particularly inspiring for a holiday location, but a good choice of food close at hand. On the Saturday we drove out into the Forest of Bowland in rural Lancashire and got a beautiful walk in: after parking the car we barely saw a soul until we got nearly back again, wonderful wild hillside all to ourselves. On the Sunday we visited Carey Baptist Church, which is almost next door to the hotel: a really friendly, welcoming and active fellowship, we would recommend them to anybody visiting that area.

For the May bank holiday we went back down to Cornwall and had a good relaxing time walking around the coast paths near Graham's Dad's house. We were also down visiting Dad again in October and had some excellent weather: nice to be walking along the coast paths in tee-shirts in the middle of October!

Our main relaxation holiday of the year was a week in the Lake District in the middle of June. Last year we had an excellent holiday staying in a rented cottage in Cockermouth, to the north of the Lake District proper. This year we booked the cottage next door. The weather was not as bright as it was last year, although we did better than most of Britain which had a thoroughly wet week. Last year we were not able to do all the walking that we had planned due to Dylys' feet blistering up, and in that respect we had a much better week this year, getting in a number of substantial walks. Low cloud was more of a hindrance than rain, and we did manage to get lost for a while on the ridge of "High Stile" above Lake Buttermere.

Dylys was made redundant from Creda in Blythe Bridge at the end of April, after more years service than we care to think about. In a restructuring, her job was moved to Peterborough. She could have gone to Peterborough, or taken an alternate job at the Blythe Bridge plant, but she opted out and to look for a new position. She started her new job as ward clerk with nearby Longton Cottage Hospital in July.

Graham had been looking for a new job for a good while and achieved a job offer in the autumn. At the end of November he started work with Syseca, a software house in Wythenshawe, South Manchester. The journey is taking over an hour each way, and so we are the more eager to sell our house.
Posted by Graham at 09:03