We like to get out walking, and do not find as much time for this as we would like. We had a decent break over Christmas and managed to do a couple of decent walks in the Peak District:
We took some days off work at the end of February and did another couple of walks in the Peak District.
We repeated the walk from Longnor on Easter Monday, not quite such a bright day, but good walking weather. We managed to include an extra peak (Wheldon Hill) this time around.

We managed a couple of walks over the May bank holiday weekend.
In the middle of May we spent a week in the Lake District: see under "Holidays" below.

For the late May bank holiday we did a walk from Youlgreave to Monyash via the Limestone Way, and back through Lathkill Dale. The walk started showery and a bit miserable, but the day brightened up nicely by late morning. The Monyash end of Lathkill Dale is a stunning rocky gorge and well worth seeing. The rest of the walk is not amongst the most exciting we have done.

For the August bank holiday we did a walk from Tideswell through Tansley Dale, Cressbrook Dale,High Dale, the Monsal Trail, Miller's Dale and Monk's Dale. This is a varied and interesting walk; but Monk's Dale is a long slog over slippery rocks at the best of times, and definitely worth a miss if the weather is poor.

Over the Christmas holiday:

Following a lack of incoming orders, Graham's company announced that there would be a redundancy programme, and in the middle of March he was informed that he was amongst those to be made redundant. The timing was unfortunate because we were planning a trip down to Cornwall to see Graham's Dad at the end of March; and we called this off so that Graham could be job-hunting instead. After a week of intensive job-hunting, Graham returned to work and was told that he could have his redundancy notice retracted.

We were sorry to have missed out on a holiday, but Graham is glad to have avoided a spell of unemployment. He continued his job search, and started a new job with Critical Path , in Macclesfield in August.

Dylys works part time as a ward clerk for Longton Cottage Hospital, a small hospital for the elderly, 15 minutes walk from home. They provide x-ray, physiotherapy and clinic facilities.

We are members of Park Evangelical Church. Graham has particular responsibilities for being the door man on Sunday mornings, and for leading Prayer and Bible Study home groups twice a month. Dylys is responsible for organising communion. This year, Dylys put her stitching skills to use by creating a new communion table cloth embroidered with the words of Jesus' command: "Do this in remembrance of Me".

As a millennium outreach exercise, the church was distributing the "Jesus" video as a special gift to the households in the vicinity of the church. Although some households did not wish to receive the video, others welcomed it and were willing to discuss it with us; so the project has been worthwhile and satisfying. Dylys was responsible for collating the records from the distribution.

In November, our church put on a Millennium show entitled "Under the Influence", depicting how our country has been influenced for good by many different Christians over the past few centuries. The scripts were largely put together by Bobbie, one of the members at Park; and Dylys did the typing for all the scripts. She played the part of Catherine Booth in the show. The church was packed out for the Friday evening showing, and there was a respectable crowd for the Saturday evening showing, so the whole event was a resounding success. 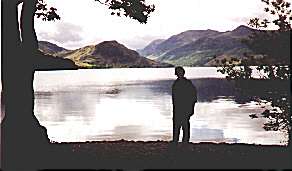 We spent a week in the Lake District in May, hiring a static caravan in Cockermouth. We have stayed in Cockermouth before, we like it very much, and thoroughly recommend it: adequate shopping facilities, loads of places to eat, and rather less commercial than Keswick or the centres in the south of the Lake District. The "Taste of India" Indian restaurant/takeaway is Graham's favourite Indian anywhere: the takeaways are very tasty in comparison to most we have had from elsewhere. "Cheers" Italian Bistro is one of Dylys' favourite restaurants, with a huge varied menu and a pleasant atmosphere.

We had set our hearts on climbing some mountains, but the weather forecast was awful and we did not dare do anything too adventurous, although the actual weather was rather better than forecast.
Having missed out on a trip to Cornwall in March, we managed to spend a week with Graham's Dad at the end of September. The weather was mixed, with some heavy rain and showers in amongst the warm sunny spells. We managed a couple of decent coast path walks. Graham's Dad bought a second hand computer whilst we were there, so Graham spent time setting it all up.

Graham's brother Phil was married to Angela in Scarborough on 1 July this year. It was a great family occasion, and with Scarborough being a good distance away from the rest of the family, many of the family opted to spend more than a day there. We travelled to Scarborough the day before the wedding, giving us a pleasant afternoon to look around the town and sea-front. We spent that night in a hotel along with Graham's mother and her friend Pat. With the time being close to Dylys' birthday, we had a birthday evening out along with Graham's mother and Pat. Sadly, the Italian restaurant to which we would have liked to have gone was fully booked, but we had a pleasant meal at the Brewer's Fayre instead. The following morning, we had a walk along the cliffs. Then in the afternoon the wedding took place at Ravenscar Country Hotel a little north of Scarborough. We travelled home when the reception formalities were complete.
Our niece Rebecca, whose premature birth was reported in last year's journal, celebrated her first birthday in October. Graham's sister Karen and her husband Andy organised a big family party at their home in Solihull. We joined in, and Rebecca received lots of presents.