We are members of Park Evangelical Church in Stoke on Trent. Every 18 months or couple of years, the Home Prayer Groups are reshuffled, so at the beginning of the year Graham took charge of a new group. This year, the groups have been meeting twice a month: once for a prayer meeting and once for Bible study.

Graham has been teaching in Sunday School for much of the year, but dropped that responsibility when the classes changed for the new session in October. Dylys still looks after the communion for the church.

We live in Stoke on Trent, but as Graham has been working in Manchester since November 1998 our house is for sale and we are trying to move to Manchester. Graham would like to be close to work, and church is important to us both; so we have occasionally spent a Sunday in Manchester, visiting churches morning and evening, and touring the housing areas in the afternoon. However, we can make no firm plans in Manchester until the house looks like it is selling.

We wanted to sell the house this year. Instead, the prospect of selling was compounded by a multiplicity of problems. First of all, we had a garage break-in in May - fortunately only a few tools were stolen, but it was very disconcerting. Secondly, the adjoining house to our semi has always been something of a mystery - it has been extended in several directions to be very much larger than the original house, and is in a bad state of repair. Furthermore, there have been a variety of people living there, none of whom we have really got to know ... until the summer when a group of teenagers in an upper room were throwing items out of their window into our garden, and laughed at us when we tried to reason with them. Not recognising any of the lads, and finding the behaviour contemptuous and bewildering, we called the police. We learned that one of the lads really does live there, and he was not able to exercise proper control over his younger friends. It was an embarrassing introduction to our teenage neighbour. But the most disturbing problem started soon after that: a number of lads started taking short-cuts through our garden. They threatened Graham with violence when he caught up with them and confronted them. After that, they continued to take their short cuts, sometimes several times a day, and banging on our doors and windows as they did so. We called the police several times, but we were told that they could do nothing as trespassing is a perfectly legal activity in England and Wales. Well ... do you fancy buying this house?

In January Dylys succumbed to the flu bug and had to take over three weeks off work. Fortunately she got over it, and Graham managed to avoid it.

We spent a weekend away in Sheffield in late February, staying in a Forte Posthouse hotel as we are still using up the loyalty card points that Graham accumulated down in Cardiff when he was working for ABB. We had an excellent couple of days Friday and Saturday walking in the Peak District (along the River Derwent at Hathersage, and over Mam Tor at Castleton). On Sunday we revisited a couple of churches in Manchester, and had a look around the housing areas in the afternoon. Whilst wandering the streets, we got soaked in one of the heavy showers: a reminder of just what good weather we had on the preceding days.

We went back to the same hotel for our wedding anniversary in April. Just as well we did not go on the Friday morning as we did in February, because it was very wet on that day. Saturday was dry and we had a good walk from the village of Hope. We also visited Speedwell Cavern: a boat trip along old lead mine shafts into the hillside to the underground cavern. We cannot recommend Speedwell Cavern: there is nothing special about the cavern itself and there is nothing to see on the boat trip; so if you are in the Peak District you should save yourself the expense.

At Easter we spent a week in France with our friends Alex and Debbie Hardstaff who are working with France Mission at a village called Allamps near Nancy. Alex was best man at our wedding in 1996. In autumn 1997 they moved from Stoke on Trent to Allamps to work for France Mission by renovating an old house for use by youth conferences, etc. We experienced driving on the wrong side of the road for the first time, and appreciated more fully what a difficult task Alex and Debbie have taken on.

In June, we took Dylys' Mum and Dad with us down to Cornwall to spend a long weekend with Graham's Dad. We had some decent walks and saw some excellent sunshine (coming home a bit sunburnt). We had a good family time together. In November, the two of us had another long weekend with Graham's Dad, and we were able to do some good walks in what was excellent weather for the time of year. 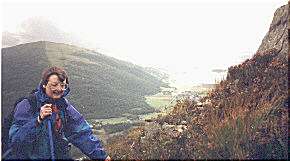 In September, we spent a week in a caravan near Fort William, hoping to do some hill-walking. Unfortunately we were restricted by the rather wet weather (and made a successful claim on the wet weather clause in our holiday insurance!), but we did manage to climb Pap of Glencoe. On the way home, we spent the weekend at Livingston, where Graham used to live and work. We had a very pleasant weekend with Graham's friends from Livingston Free Church of Scotland. It was a communion weekend, which meant that a few more people than usual were present.

Graham bought our Nissan Micra new at the end of 1992, so it is now seven years old, and the miles have really clocked up since Graham started work in Manchester. We are conscious of how petrol has gone up in price over the past year, and suddenly at the time of a service in the spring the car started doing many less miles to the gallon. We have not resolved this problem, despite taking the car back to the garage which performed the service, and to an authorised Nissan dealer. We would like to hang on to the car until we have moved to Manchester, but we anticipate it may become necessary to change the car before then.

We can pinpoint the fuel economy problem to the time of the aforementioned service because we have always kept a log of the mileometer and the amount of petrol purchased at each refill. Since we also started logging the brand of petrol purchased, we have concluded that not all petrol brands are the same. We get more miles to the gallon out of Elf, which makes this brand cheaper even if Esso or the supermarkets are selling at a penny or two a litre less. So we would commend anybody to keep this kind of log if you really want to save money on petrol.

Three weddings and a funeral ...

In March we saw our friends Phil and Jenny at Park Evangelical Church married in the church. In May we saw Dylys' cousin Trevor married to Melanie at Ipstones (a village near Cheadle, Staffordshire). In July we saw the wedding of Graham's sister Wendy to Kevin at Quorn.

In April we attended the funeral of Dylys' Uncle Ken. He had been terminally ill and it was expected. The events of April and May gave us opportunity to catch up with many of Dylys' relatives.

Graham's sister Karen and her husband Andy were expecting an addition to the family in the new year, but Rebecca arrived three months premature on 11 October. She was in intensive care until a week before Christmas. Over Christmas we had the pleasure of seeing her in a home environment.