We have been attending Bethel Baptist Church in Macclesfield since we moved to the town in August 2001. Graham teaches at Kool Kidz (Sunday School), and since the start of the year has been helping out with the "After Eight" youth club on a Thursday evening. Early this year, Dylys was appointed treasurer of the church building fund, which means that lots of people keep approaching her with big bills! In mid-April, we helped out with a "Fun Day" at the church: the weather was brilliant, lots of visitors came, and many people asked when another such event would be organised.

Graham has been working with Critical Path in Macclesfield since August 2000. Dylys works at the Office of the Information Commissioner in Wilmslow. 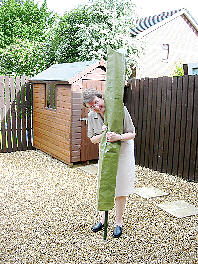 We moved into our own house in Macclesfield in October last year. From there, Graham cycles to work in nearby Tytherington, whilst Dylys drives to her place of work in Wilmslow. The house had a small mossy garden with a damp shed that was falling apart. Since Graham needs to keep his bicycle in the shed, we have had the shed replaced, and we have had the mossy lawn replaced with gravel. Finally, we had a new rotary line, pictured here under its cover.
Indoors, Dylys has done some decorating during her flexi-days off work.

Dylys celebrated her xxth birthday in July (xx is a round number), and received greater than the usual number of cards and presents. It is standard practice for us to go out for a meal on the Friday closest to our birthdays, and there was nothing unusual about going to the Mexican in Macclesfield town centre - except that Graham did not tell Dylys that a number of friends were also invited. There were eleven of us in total, the food was excellent, and we all had a good time.

Our newest nephew, William, was born to Andy and Karen (Karen being Graham's sister), also in July. A week after the birth, we picked up Graham's Mum in Leicester and went down to Solihull to see Andy and Karen and family.

We spent an exceptionally warm and sunny week in March with family in Cornwall - a nice summer holiday down at the seaside. So we got some decent coast walks done as well as seeing the family.

We returned to Cornwall at the end of October, and took Graham's Mum with us for the first time. Graham's sister Karen and her family from Solihull happened to be down at the same time, staying at Wendy's house in Saltash. So we had a family get-together at the Eliot Arms in Tredagillet, near Launceston. The twelve of us had a room to ourselves: we had a great time, and can thoroughly recommend this pub as a meeting place. Good variety on the menu as well.

We booked a caravan in the Lake District for a week in the middle of May. We have stayed in Cockermouth a number of times before, and really like the town. On the Sunday we went to the Methodist church in the morning, had a general wander around the town in the afternoon, and went to a united service at the United Reformed Church in the evening. On the Monday when there were sunshine and showers, we climbed Grisedale Pike, and then did a walk over Causey Pike. On the Tuesday when the weather was again showery, we did a walk over Catbells in the morning, and then repeated it in the afternoon after a visit to Keswick. Wednesday was a super day: we went to Buttermere from where we climbed Red Pike, walked over High Stile, and came down over High Crag. On Thursday we went to Glenridding from where we climbed Helvellyn via Striding Edge: the weather was absolutely perfect for clambering over these specatular ridges, hardly a breath of wind. On Friday the weather was disastrous, but we cannot complain after such a good main part of the week.

We liked the Lakes in May so much, that we booked up for a second week, overlapping September and October. We stayed in the same caravan in Cockermouth. Arriving early Saturday afternoon, we set off to climb Grisedale Pike (as we had done in May). On the Sunday we went to the Methodist Church in the morning and then did a very picturesque walk from Stonethwaite in Borrowdale in the afternoon. Monday was unsettled, but we managed a decent walk from Keswick over Latrigg in the morning. Tuesday started very wet and then brightened up, at which point we did a circuit around Ennerdale Water. Wednesday was a glorious summer's day (1st October!), so we did theNewlands Horseshoe, covering Maiden Moor, High Spy, Dalehead and Hindscarth. Thursday was another bright day, when we headed south to climb the Langdale Pikes. Friday we did a short walk from Keswick over Walla Crag, and then returned home.

This did not quite go according to plan. Neither of us were working between Christmas and New Year, and we were looking forward to a decent break. We were expecting to entertain Dylys' family on Christmas Day, and two days later we were due to go to Graham's sister's house at Solihull for the get-together on that side of the family. There were no other plans, so we anticipated getting some jobs done around the house, and getting out for a day or two together.

But Graham's mother was unwell, and it meant a lot of time on the road, visiting and caring for her, and some unscheduled nights away from home. Fortunately, we were able to entertain on Christmas Day, and have the get-together two days later. Mum was well enough to return home on her own soon after that. But where did the Christmas break go ... ?